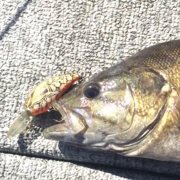 “Fishing will be slow but bass are large this time of year,” Wayne said, as incentive for me to join him in early March when a cruel northeast breeze ruffled the surface of the Columbia River. The only evidence of spring was a flock of sandhill cranes that chortled as they circled overhead. An empty boat launch suggested our efforts could be futile.

I was lucky enough to land the first bass, maybe 2 lbs, vertical jigging in 40 feet of water with a 5/8 ounce Blade Bait. Wayne caught the next two on a drop-shot rig, including one that weighed a hefty 4 lbs. “Smallmouth overwinter in deep water,” he shared, expertly maneuvering his boat over a deep drop-off lined with washtub-size boulders. Despite a lull in action, Wayne stayed vigilant at the bow until the sun slipped below Rattlesnake Mountain. Meanwhile I lost interest after donating four rigs to the bottom of the river.

For Wayne, bass fishing is not an avocation so much as it’s an obsession. Once a tournament angler, he now fishes for fun, and for no other species than bass from early March to late November. He records water temperature, technique, and the length and weight of all bass caught. Favorable locations are logged as waypoints on his sonar. If the bite is slow, Wayne stays on the water until he figures out why. If bass are biting, he can’t stop casting. Wind, rain, and a rising moon do not deter him.

In preparation for our next outing, I spent a weekend organizing tackle bags, many which reached a general state of disarray over the winter. Careful inventory showed over three dozen packages of soft baits, including both 3-inch and “lunker” grubs, Hoochie Koochies in two-tone and sparkle combinations, various Tube Jigs or Gitzits, scented Power Worms, crawdads, and lizards.

A tangle of crankbaits, Blade baits and spinners filled out my portfolio of bass lures. The sheer volume of gear bordered on ridiculous, but you never know what bass will be biting on any particular hour of the day.

Early April found us back on the water again, this time in the lower Yakima River. Smallmouth bass move from the Columbia River into the lower “Yak” and backwaters each spring, attracted by warmer water temperature. Wayne brought in four nice smallies using a silver-and-blue Square Bill Crankbait, while I focused on refining my latent netting skills. I got even a week later when I jigged six bass on a 3-inch Sassy Shad. “You have the hot lure this time,” Wayne said.

“Give credit to the presence of juvenile salmon,” I replied. “My offering likely resembled fall Chinook smolts on the early part of their seaward journey, a favorite prey of bass.” My advanced degree in Fisheries may not make me a better angler, but it leads to more theories about what works and what doesn’t.

Smallmouth bass are abundant throughout the four lower Snake River reservoirs, where they frequent rubble shorelines and backwater channels. The Hells Canyon Reach is notably famous for providing non-stop action. I recall a hot summer day following a jet boat ride to Copper Creek Lodge. Casting for smallies while standing waist deep in the river was a great way to cool off. Further upstream, Brownlee Reservoir is excellent for smallmouth bass (also channel catfish and crappie). Coves where tributaries join the reservoir are favored, as are rocky outcrops.

Multi-day guided raft trips on the lower Grande Ronde and John Day Rivers offer families plenty of fun for small bass, whether tossing a surface popper with a fly rod or a 1/8-ounce jig and curly tail worm using ultra-light spinning gear. Impressive landscapes and abundant wildlife enhance the experience. Shuttle service is available for anglers whose idea of adventure is casting from a pontoon boat.

On calm days in May I will test my luck in warm backwaters of the John Day Pool. Where adult smallmouth bass gather near sunken reefs and gravel patches in preparation for spawning. Throwing soft plastics in colors of Motor oil, Pumpkin, and Fire Tiger in Paterson and Crow Butte sloughs has led to 50-fish days in the past. Sometimes a drag and twitch technique attracts bass like a frantic crayfish and other times bass want to eat something that swims like a crippled minnow.

I can’t wait to try out my new 5/6 Avail fly reel (www.rangereels.com). Its innovative carbon fiber drag is sure to put the brakes on any large bass that moves into shallow water to feed. Oversize flies such as Clouser Minnow, Maribou Muddler, Rattle Tube, and Bunny Leech, are often effective. Spun deer hair patterns that mimic a small mouse are a favorite choice on the Grande Ronde River. By early summer, post-spawn smallmouth are aggressive enough to go airborne when they smack a Bug Popper worked on the surface. That’s when the real fun begins. If I’m as successful as I imagine, this time around it will be me telling Wayne, “We can’t leave now. Don’t you know? The best bite always occurs at sunset.”