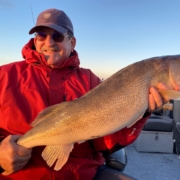 “There’s not enough antifreeze in my blood to stay on the water for another pass,” I say to my fishing partner. It is the last week in January. Our rod guides are iced up after trolling in dense fog for three hours without success.

“Suits me,” he replies. “I never figured you for a good guide.”

I’ve also been skunked in the presence of others far more times than I care to remember.

I’ve done all these things but hadn’t fished for walleye at night until late February of this year when hero shots of large walleye populated Facebook pages, anglers with LED headlamps strapped to their forehead. My boat trailer was in the shop for repairs so I gave BT a call. “Sounds good,” he said. “My freezer is low on white meat.”

We made a warm up troll along the Richland shoreline as the sun sank low on the western horizon. When darkness fell, we outfitted rods with deep diver Bandit lures and spooled out 100 feet of 15 lb test braided line. The light sticks on our rod tips winked staccato time as we trolled one mile-per hour upstream along a 20-foot bottom contour.

Time passes slowly in the dark. It is difficult to judge distance and details of the landscape are obscured. Luckily BT had a Fishfinder GPS and sonar with bottom charts to guide the way. We bundled up in insulated bibs and stocking hats to ward off the chill. The intermittent honk of resting geese, far off sound of police sirens, and the purr of BT’s kicker motor broke the stillness. As luck would have it, one hour into the moonless night produced our first strike. I grabbed the pulsing rod and felt the pull of a heavy fish.

“Put a light on my reel, will you?” I yelled to BT, when five minutes of steady cranking failed to bring the fish to the boat.” BT complied. The line counter dial read “200.”

Lesson learned: large winter walleye fight like a log. Tighten your drag, put the motor in neutral, and keep constant pressure on the fish. We eventually brought my largest walleye ever to the net: 35 inches from nose to tip of caudal fin and an estimated 17 pounds. Two more passes through the same stretch of river and BT’s rod went down to a more modest size walleye. That one went into the fish box.

Why all the fuss over walleye? For one, their filets are firm and flaky with a flavor described as “delicate with a buttery flavor.” For me, walleye fishing provides an excuse to get my boat out when salmon and steelhead angling is not an option.

According to Tyler Miller (MillerTimeFishing; 509-942-9044), trophy walleye season brings in a large number of out-of-state clients for trips he runs on the Columbia River. Tyler prefers to start his fishing day a few hours before sunset. He keeps his boat on the water until the bite slows or clients get tired of reeling in fish. In addition to onboard electronics, he carries extra lighting and hand held GPS that automatically sends your location for help if needed. “Some trips I don’t get home until midnight,” he says.

Following introduction to Banks Lake and Lake Roosevelt in the 1960s, walleye migrated downriver to find a home throughout the Columbia and Snake River system. Wide-open flats between Wallula Gap and the Snake-Columbia River confluence remain as one of the best places to find large walleye in the United States. Both the Oregon and Washington State record walleye have been caught in McNary Dam Pool (Lake Wallula) at 19.96 lbs and 20.30 lbs, respectively.

In the lower Snake River, Lower Monumental pool has the most to offer, with walleye found from the mouth of the Palouse River upstream to Little Goose Dam. Winter anglers from the upper Columbia region favor Lake Roosevelt, Lake Rufus Woods and Banks Lake. Moses Lake and the Potholes are popular spots for anglers following the ice out period.

Walleye don’t favor strong current and move to slower water off the main current when river discharge is high. Trolling is the most effective way to find fish when they are scattered in open water. Once a school of biters is encountered, anglers might switch to a vertical presentation with lead head jigs or blade baits. Universal colors of silver, white, and chartreuse provide improved visibility at deeper depths.

Washington and Oregon fisheries managers recently removed size and harvest limits on walleye in the Columbia and Snake Rivers, citing a need to reduce predation on juvenile salmon and steelhead. However, devoted walleye anglers release larger females and limit their take of smaller fish.

Walleye feed on juvenile shad, salmon smolts, lamprey ammocoetes, and bottom-dwelling resident fish that include sculpin and sandroller. A unique layer of light-gathering tissue in the back of their eyes, the tapetum lucidum, allows them to detect prey at low light. Consequently, night fishing increases the odds of hooking trophy-size walleye that move from deep water to the shallows to feed. No wonder anglers are willing to drive hundreds of miles to fish in the dark for a chance at a “walleye of a lifetime!”