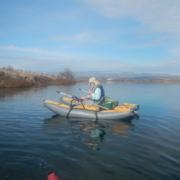 Any text message that begins with “Let’s go fishing!” should lead to quick resolution. However, most of us retirees have definite opinion about where, when, and how to fish. Three days, 29 text messages, and 13 e-mails later, we three long-time friends decide to haul our pontoon boats to Quincy Lake.

Quincy Lake is located in WDFW’s Quincy Wildlife Area, a popular fishing and hiking destination. Access to the 54-acre lake is afforded via a dirt road off WA-281 N, southwest of the town of Quincy. The shallow basins that form Quincy Lake, nearby Dusty Lake, and four small, disconnected lakes known as Ancient Lakes, were carved out when waters from the Ice Age Floods poured out of the Grand Coulee. Geologists describe the surrounding landscape as “cataract-lined alcoves separated by basalt ribs.” Anglers refer to the water bodies as “desert seep lakes.”

Fellow fly caster Ted jumps out of his truck and hands me a checklist of required items for the trip: fly rod, reel, flies, spare leader, landing net, stocking foot waders, boots, fins, oars, oar locks, life jacket, whistle, lunch, water. Once satisfied I have everything, we load my partially deflated pontoon boat atop theirs and we are on our way!

The right pocket of my pontoon boat is stuffed with six boxes of flies that contain chironomids, beadhead nymphs, wooly buggers, leeches, and other assorted soft hackle patterns. I start with a two-fly tandem that includes a Brown Wooly Bugger with a Leech trailer. Wooly buggers are a streamer-type fly designed to resemble natural trout foods such as minnows, crayfish, and aquatic insects. Leech flies come in all colors of the rainbow. The orange version I used was basically a maribou feather wrapped around a no. 12 barbless hook and tied off at the eye. What causes trout to strike either pattern is a subject of debate among flycasters. Characteristics that include undulation and contrast come to mind.

I used variations of the same two patterns all day. As Ken stated, “You have to have confidence in your fly or you won’t catch fish.”

We inflate and launch our pontoon boats. Ted paddles to the east end of the lake, where steep basalt cliffs crown the shoreline. I follow Ken’s wake to the north shore, let out 50 feet of intermediate sink line, and am immediately rewarded with a 14-inch rainbow. Ken leaves me after landing a trout of his own and ventures into a narrow arm where he caught an “18-incher” on his last visit to Quincy Lake. When an angler with a small outboard motor joins him, I peel off to explore where fly casters work the main launch area from prams.

Big mistake. Most anglers are fishing tiny chironomid patterns under a strike indicator, aka bobber fishing. Also, the west end of Quincy Lake is shallow and crowded with submerged vegetation. Lesson learned: when you fish a lake for the first time, follow someone who has caught fish there before. Do not waste valuable fishing time surveying the entire lake by yourself.

Over the next hour, I paddle against a stiff breeze, out of casting range of bank anglers that toss Power Bait. While doing so I am reminded of the limitations of trolling with child-size fins, that my oars splash like a frantic coot trying to lift off from the water’s surface, and a need to mount my seat further forward to relieve the strain on my sore back.

When I finally reach the east end of the lake, Ted reports he has caught nine trout. His success and my two-hour dry spell inspire me to troll slower and deeper. My daydreaming is soon interrupted with a vicious strike. I land the deep-bodied, silvery 16-inch rainbow, but my peanut butter sandwich dives into the lake when wind blows me into the bulrushes. Ken eventually joins up to share in the success. Our regular shouts of glee are interrupted by the “rattling bugle call” of sandhill cranes that circle the channeled scablands and a “conk-la-ree” of redwing blackbirds from their perch in the willows.

Dark storm clouds loom when we paddle back to the launch. “A great day of fishing,” Ted announces, as we tip a cold one. A double rainbow forms to the northeast on the drive home, during which Ken entertains with stories about rattlesnake dens and a pet scorpion. “What did you feed the scorpion?” Ted asks.

“Mostly spiders and soft-body bugs,” Ken replies. “He would pounce on them, sting them, and eat them like a candy bar.”

Seven lakes that make up the Tucannon Lakes complex are also stocked with several thousand trout each year. Number and timing of stocked trout for all Washington water bodies can be viewed on the WDFW website under “catchable trout plant reports.” Given all the choices, it’s no wonder trout anglers can’t make up their mind where to fish.