Mid-Columbia Walleye: Where to and How to Catch Early Season Fish 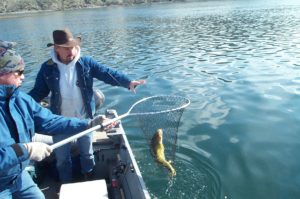 Inland Washington and Oregon anglers are fanatic about their walleye. I have seen strangers almost come to fisticuffs because one kept an 8-pound female walleye that the other thought should have been released. Even the best fishing pals alter background detail on photos to hide a secret spot. Then there are friends who look into space when you ask if the statute of limitations is up on a hot spot they once showed you.

Such possessive behaviors are standard for those pursuing the next 20-pound walleye from the Columbia River. Still, it’s not possible to keep a lid on an object of desire. So, what are some secrets to catching a fat-bellied, early-season bug-eye?

Walleye gear is not complicated, yet each method has a time and place. Standard methods include trolling with deep-diving crankbaits or spinners with a worm harness held deep with 1 to 3 oz bottom-walkers.   Trolling in a downstream direction slightly faster than the current is an effective way to locate walleye when they are scattered. Nighttime trolling with a UV ProGlo worm harness can also lead to the pull of a big walleye.

Once a school of biters are found, many anglers switch to vertical presentation using either lead head jigs or blade baits. As with most fishing there are universal colors, typically chartreuse and white, that provide improved visibility at deeper depth. But even Berkeley Power Worms in purple or black and scent-soaked bucktail Rock Dancers can produce fish when twitched along the bottom. Experienced anglers use the lightest jig head possible while maintaining bottom contact and taut line in order to feel the subtle tick signaling a cold-water walleye bite.

When in doubt if bottom targets are walleyes, drop an underwater camera down to make sure you are not marking largescale suckers. If indeed walleye, stay on the spot and vary your presentation.

Much has been written about walleye fishing downstream of McNary Dam due to more trophy-sized bugeyes taken there than most any place in the Columbia River. But, there’s other hot spots, such as the Hanford Reach and lower Snake River, neither of which have minimum size restrictions.

A dedicated group of anglers concentrates on the channel adjacent to hard bottom flats extending off the mouth of the Snake River downstream to Badger Island near the Walla Walla River delta. Although early season catch rates are generally not high, most fish are large. The Washington State record was reportedly taken near here. One challenge with this section of the river is maintaining effective boat control in the seeming-constant wind.

According to Jeff Knotts of JB Guide Services, who spends much of his time fishing off the mouth of the Snake River, the key is to “Slow down your presentation.” Jeff is also a proponent of smaller lures such as the micro version of Mack’s Lure Smile Blade once he gets on a school. “Deep diving plugs such as Tail Dancer and Hot Lips may also trigger a take from lethargic walleye,” says Jeff.

Another increasingly popular location is a large gravel bar just upstream of Pasco’s Blue Bridge. From this point upstream, finding a concentration of walleyes is more hit-and-miss due to increasingly stronger currents the further upstream from McNary Dam one gets.

Spring-time walleyes tend to hang out in 18 to 30 foot depths where the cobble bottom transitions to smaller gravel or sand/silt. Examples of these “edge” habitats include off the mouth of the Yakima River, the downstream end of Savage Island and lower White Bluffs. As spawning time nears, walleyes can be found as far upstream as the Priest Rapids Dam tailrace.

One caution for the Hanford Reach is rapidly fluctuating water levels. Check discharge from Priest Rapids Dam at USGS 12472800 (http://waterdata.usgs.gov/nwis) before mapping the bottom of the river with your prop. There are free launches at Hood Park on the Snake River and Columbia and Leslie Grove Parks for McNary pool access. Those with 4WD and the desire to explore the scenic Hanford Reach can dump boats off the bank at Ringold Springs and the north side of Vernita Bridge.

Well, the secret is out. An old WDFW web article says walleye distribution is limited to areas downstream of Ice Harbor Dam. Not so any more. While fewer walleyes are present in the Snake River, numbers have been steadily increasing over the past 5 years. There are clues, such as the Palouse arm warming up sooner than the main Snake River in the spring and an abundance of yearling-sized walleyes that suggest a successful spawning population. Lower Monumental pool has the most to offer, with walleyes found from the mouth of the Palouse River upstream to the Little Goose Dam. Scuttlebutt is that walleyes are also being caught upstream to New York Bar in Little Goose pool.

Kurt Sonderman of R & R Guide Service (509-948-0763) shared several tips for anglers having interest in fishing the lower Snake River. “Be patient and vary your presentation. Some days they may hit silver bullet blade baits and other days a jig head and curly tail with no crawler will do the trick. Try break-lines but don’t be afraid to fish deep, 40 to 50 feet. “ Kurt also professed the importance of paying attention to conditions such as reservoir level and flows. For example, snowmelt from the Palouse and Tucannon Rivers, in addition to unstable flows in the Snake, can affect fishing success.

Darby Linklater of Darver Tackle Shop in Starbuck (509-399-2015) reports that worm harness rigs by Max Lure, Northland and Luhr Jensen are all popular in the lower Snake River. “We also sell a lot of blade baits. Many walleye anglers keep a ready supply of 3 to 4 inch Gulp Alive minnows in the chartreuse and gray-white.” These methods relate to the dietary preference of walleyes for juvenile shad, minnows, and even, dare I say, salmon smolts.

Primary access for boaters is at Lyons Ferry Marina (509-399-8020), which has a marina, RV facilities, tackle shop and a restaurant.

If there is a secret to catching the next state record walleye, it’s to find a new area where they have recently expanded their range. Other suggestions include: fish seven days a week, always fish alone, fish after the sun goes down, disguise your gear, change the name on your boat, and don’t brag to your buddies or share details with your significant other.

Walleyes were the most recent “white-meated” fish species to be introduced to the Pacific Northwest. After showing up in Banks Lake and Lake Roosevelt in the early 1960’s, their range quickly expanded. Since then, it’s been move over northern pikeminnow and smallmouth bass-there’s a new bully on the block. Walleyes have effectively exploited the local prey base to grow to record sizes. The only thing holding them back is poor survival of newly-hatched larvae in a handful of areas.

Water temperature in the Hanford Reach and lower Snake River approaches a low of 35 to 36 F in early February after which increasing temperature triggers pre-spawning walleyes to move from winter habitats. Males are first to stage near spawning areas. Their arrival signals that larger females will soon show up. Prior to this staging period, anglers might settle for playing catch-and-release with a few trophy-sized fish rather than bagging a stringer of 2 to 3 lb eaters. Spawning occurs in late March and April at water temperatures that range from 38 to 45 degrees.