Every person has a dark side. My situation involves fishing for steelhead with bait when I didn’t know the difference and continuing to do so where it’s
effective. Like I once told a fellow fly fisher, “ I would rather catch a steelhead on bait than get skunked.”

One reason for using bait in small streams is steelhead don’t play fair. They bury their nose in root wads, hunker down behind washtub‐sized boulders, and spook at the slightest movement. And, it’s difficult to present a fly in their strike zone, particularly in 39 F water when they prefer not to move. That’s my excuse and I’m sticking to it.

Drift fishing is about reading the water and delivering the goods to a migration lane, a resting spot or a snag‐filled hideout. It’s about shifting position
and adding or subtracting weight to allow the current to carry your bait to a location where a steelhead might rest.

Then, there is the take. In many ways figuring out that a steelhead is messing with you is not so much noting something specific as figuring out something
different. For instance, one signal of a steelhead mouthing bait might be when your line stops stone cold in the middle of a drift. Another signal might be a “tap‐tap‐tap” that occurs at a slightly different rhythm than that of pencil lead dragging over smooth rock. A hungry steelhead might also pick up bait and move sideways. Good steelhead fishermen must remain alert to these differences at all times.

There are other methods to small river madness. In this article I emphasize a trio of eastern Washington streams having sizable runs of steelhead. 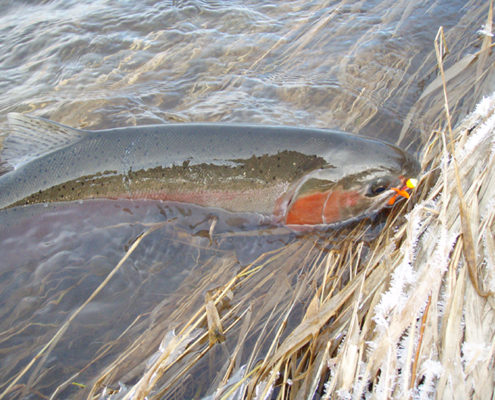 Summer steelhead stage in the mainstem Columbia and Snake Rivers until conditions are suitable before entering the Walla Walla, Touchet and Tucannon
Rivers. These tributary streams are relatively small in size with average winter flows ranging from about 150 to 600 cfs. (Table 1) Water temperature is one factor for steelhead entry but stream flow is most important. The first surge of upstream movement occurs after flows ramps up in early fall. It’s rarely the first rainfall event, more likely the second, third, or even the first snowmelt, that encourages
steelhead to enter their natal tributary.

Each successive high flow event or “freshet” encourages further upstream movement of steelhead from low gradient holding areas. Finally, as spawning time nears they make a final push to headwaters. Wild fish tend to enter later in the year, extending the season well into March. Keying into these behaviors increases the odds of being in the right location in the watershed at the right time.

Steelhead are basically rainbow trout that got the urge to migrate to the Pacific Ocean and back. Although larger in size, they retain trout tendency in terms
of where they reside. Note the following stream features when scouting out places to fish: current edges, deep runs, boulder patches, deep pools, “pocket water” and outside corners of bends. That’s where you cast. Cover, in the form of turbulence, depth, bottom relief, boulders, submerged logs, and overhanging brush is essential habitat for steelhead holding in small water.

Although camo clothing is not a requirement, successfully steelhead anglers are unobtrusive. Don’t wade down the middle of a stream and always work shallow holding areas from a distance before going for the heart of a honey hole. Casting from the knees or from behind streamside cover is also encouraged.

Being first on the water is a huge advantage on small streams although early morning is not always a requirement. Midday action, particularly on overcast days, can be red hot. It’s also not unusual for steelhead to come out from cover at dusk. I’ve landed more than one by the light of the moon.

I revisit stretches where I have caught steelhead before, even if stream features have changed. Particular areas attract fish hydraulically in ways that we don’t always understand. Another rule is to be thorough with presentation, i.e., cover every drift line, but don’t stay in the same place all day. Small stream steelhead fishing is much like bird hunting. If nothing shows, move on. Also remember that even though steelhead are territorial, males and females pair up early in the season. So, where there is one steelhead, there is often another.

I have found a 8½ ft medium action rod and spinning reel loaded with 10 to 12 lb mono to be best for casting between and under overhanging branches, brush piles, car bodies and log jams. Accuracy is more important than long casts. Basic drift gear includes an assortment of split shot, slinkies and pencil lead with a Gamakatsu or Brad’s ultra sharp hook in sizes #1 to #4. Leader lengths from 18 to 30 inches depending on water clarity. For extra flotation and attractive color, secure a small corkie (vary sizes to achieve a desired drift speed) directly above the hook. Remember that regular contact with the bottom is an objective.

I wear insulated booted chest waders because they allow for crossing to the other side of a stream, chasing steelhead around brush piles and retrieving gear
from snags. Neoprene waders or $400 flyweights are not recommended when tromping past barbed wire and dead falls hidden in the grass.

Most land adjacent to these three Blue Mountain streams is private property. However, in some cases, landowners will grant permission to fish for those who ask. WDFW provides sportsman access in select areas between Touchet and the Whitman Mission on the Walla Walla River. The lower Tucannon River has both public and “sign in” access for part of the lower 8 miles and upstream near Maringo Grade. Public access to the Touchet River is mainly limited to near Prescott and adjacent to Lewis and Clark State Park.

Not to be ignored in small waters is whether to go solo or fish with a companion. It depends on one’s tolerance for personal distance, but three can be a
crowd. I usually fish alone or split up from my buddy since my idea of a good time is not watching someone else land a steelie from my favorite hole.

Fishing Blue Mountain tributary streams is about observing how high water rearranges graveled flood plains to wipe out and create new honey holes, the winter senescence of streamside vegetation, and being surprised by a river otter or kingfisher. The best reward, however, is encountering a fresh run of steelhead on a cold winter morning. Now, that’s something worth getting up in the dark and
driving on icy county roads for.