Upriver Brights on the Hanford Reach

Imagine a place where 40 lb salmon lurk in the shadow of nuclear reactors, hillsides are like backdrop to a Roy Rogers western and up to half of all fall Chinook salmon in the Columbia and Snake Rivers return each fall. This place exists as the Hanford Reach, often referred to as the last wild stretch of the Columbia River and unique enough to be designated as a National Monument in 2000.

The Reach is where up to 100,000 fall Chinook salmon have returned to spawn. These fish, termed “upriver brights”, are distinguished by their large size and orange flesh with high oil content, characteristics making them valuable to sport, tribal and commercial fishers. Fishing action in the Reach ramps up in early September.

Fall 2010 bodes well for a chance at trophy-sized fish, according to Paul Hoffarth, Washington Department of Fish and Game. “Nearly 40% of the run is expected to be 5 year-old fish. This compares to 2009 when over one-third of the run was comprised of smaller 2- and 3-year old fish.”

When asked why the rush to close the season down on October 15 last year (an Emergency Rule closed the last 8 days of the fishery), Hoffarth explained the harvest quota policy helps ensure that the Hanford Reach escapement goal is reached. “It’s the most productive mainstem spawning area in the entire Columbia Basin.”

Given that background, here are some where-to’s and how-to’s. 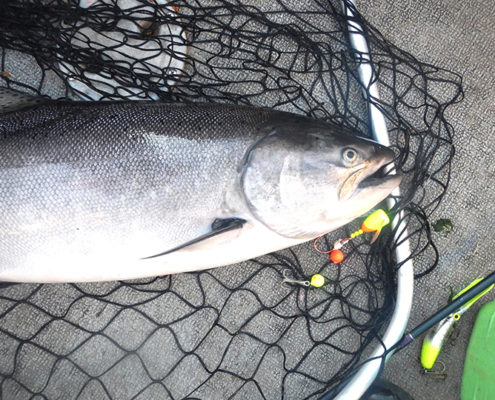 The formula for finding big fall Chinook is to target holding areas and migration corridors where fish are concentrated, confused or delayed. Identify these locations by studying shoreline features and using your sonar to read the water. Getting salmon to bite is a different challenge, particularly during the “lockjaw” period in early September when water temperatures are still well above 60 F. But when the bite is on, daily limits can be the rule.

For those wanting adventure, travel downstream past B/C and Coyote Rapids to Locke Island and 300 ft high White Bluffs. There is a 60 ft deep hole at the top of the Bluffs (100-D site) and another off the old White Bluffs ferry landing. A challenge to fishing this part of the Reach is navigating depths that approach 3 feet at low flow. Not to mention big rocks. Thus, having a jet boat is an advantage. Another holding area for big falls is at Ringold Springs, 9 miles upstream of Richland. Anglers work the Franklin County shoreline adjacent to the hatchery and a mile upstream where the river is deeper and bottom more uniform.

While radio-tagging studies show that the majority of fall Chinook salmon hold in deep water adjacent to gravel bar spawning areas, what about migrating fish? Salmon in prime condition continue to migrate upstream at the rate of 1000 or more fish per day through early October. To intercept an early- or late-season “chromer”, target places where the river channel crosses over or constricts to form a deep slot. Example locations include off Columbia Point near Richland, Taylor Flats, the wooden power lines near the Hanford townsite, and below Coyote Rapids. As an aside, Coyote Rapids might be the last place in the Columbia River where boaters can still ride over a “wave train”.

Although it’s a well-known fact that Pacific salmon don’t feed in freshwater, it’s a good idea to give them something that looks and smells like food. Or, maybe it’s territorial behavior, in which case bang them on the nose a few times with something flashy. Standard downrigger gear for slower water includes a flasher or dodger with cut-plug herring, Brad’s Super Bait stuffed with oily fish parts such as tuna or herring, or sardine-wrapped Kwikfish. Jeff Witkowski of Darrrel & Dads Family Guide Service (1-866-360-1523) suggests using a 42-inch leader from your flasher when using Super Bait and is diligent about keeping the lure within 6 to 10 feet of the bottom.

It’s important to know thy river bottom when if you plan to hang a 8 lb lead ball off the side of your boat. Variable depth and strong current in many sections of the Reach, including Ringold and 100 B/C, make for selective down rigging.

An effective, and relatively safe, way to work kings hanging near the bottom is to back-bounce golf ball-sized cluster of roe or a wrapped Kwikfish behind a jet diver. Jet divers allow for a controlled presentation in fast water chutes. The all-time favorite Kwikfish color for the Hanford Reach is silver and chartreuse. But, no matter what color your lucky plug is, be sure to mix up sizes and trolling speeds to generate a strike.

Other options for the Reach include flat-lining a large diving plug, such as a “Mag Wart”, “Hot Lips” or “FatFish” along the edges of gravel bars at 10 to 15 ft depth. Orange is a favorite color. These tried and true lures can be deadly late in the season when salmon get more aggressive or when they roll and cavort at the surface. Also keep a few of Worden’s deep-diving M2 Flatfish in your box. They have great action in fast water. For a more unique experience, take your rod out of the holder to back-troll a Kwikfish using a 4 to 6 oz lead ball off a dropper. Use an active thumb on the bait-casting reel to keep your lure working near the bottom. Warning: hooking a salmon this way can lead to addiction.

In summary, different methods work in different parts of the river and at different times for a good reason, mostly to do with maintaining an effective presentation. When all else fails, Witkowski advises to fish “deep, slow and early. If at the end of the day the digger end of your Kwikfish isn’t bare, then you ain’t fishing it right.”

The Hanford Reach, roughly 40 miles long, has several access locations for boaters. Before choosing where to fish, consider the size of your gas tank and knowledge of the river. Because of strong currents and occasional wind, having a kicker motor is a must. Public boat launches include Columbia Point, Howard Amon and Leslie Grove Parks at Richland. There is a gravel launch at Ringold Springs (Franklin County shoreline north of Pasco) with nearby public camping and restrooms and unimproved access 10 miles upstream. The middle of the Reach is accessible via a day-use only concrete ramp located at the old White Bluffs ferry landing (off Highway 24).

Anglers fishing the upper Reach use unimproved launch sites at Vernita Bridge and near “Vernita Village”, where salmon anglers congregate for a month or so each fall. Four-wheel drive rigs are strongly recommended here due to potential for tail pipes to go underwater when launching a boat.

Be prepared for variable flow in the Hanford Reach because of power-peaking operations at Priest Rapids Dam. Water surface elevation can change up to 6 vertical feet over a 24 hr period. Access daily and weekly flow patterns at http:/waterdata.usgs.gov for USGS 12472800 Columbia River below Priest Rapids Dam.

Bank fishing is restricted mainly to the Ringold Springs shoreline. Note that the U.S. Department of Energy Hanford Site shoreline is closed to public access.