Imagine an Indian summer day in early October. Cottonwood is turning gold and coots bob along the Columbia River shoreline. Washtub‐sized boulders expose broken water where steelhead might rest. Downstream, a narrow gravel bar extends into the river. You hook up with a small, silver‐bright steelhead that twists and turns as it leaps out of the water.

That idyllic scene was my introduction to Hanford Reach steelhead on a fly. The 50‐mile long Reach is unique as the only free‐flowing (albeit regulated) section of the Columbia River in the continental U.S. With an average discharge of 120,000 cfs and a half‐mile wide in places, reading the water seems daunting. But, don’t be intimidated. Most steelhead hold in water less than 8 feet deep. It’s just a big river where one rarely needs to wade past knee‐deep. 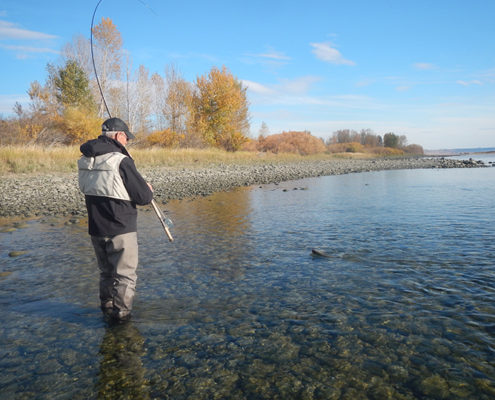 The average steelhead is a 1‐salt fish weighing 4 to 6 lb and on the way to an upper Columbia River tributary. Peak migration for these fish is from August through early October. The primary bank fishery is at Ringold Springs, a half hour from Pasco off Road 68/Taylor Flats Road and 9 miles from Richland by boat. Fly fishers target shoreline “kick points” and boulder piles here and on both sides of the river from Taylor Flats upstream to Savage Island. Some local anglers are enterprising enough to stack rocks that create resting areas for migrating steelhead. Ringold has an unimproved boat launch for 4‐wheel drive vehicles and short‐term camping.

If you have a boat and knowledge of the river bottom, check out the rest of the Reach. Steelhead hold in long runs where the main channel is braided by cobble islands, along most any stretch punctuated by boulders and near shoreline points sculpted by Ice Age floods. An unimproved launch at Vernita Bridge provides easy access to the upper Reach. To get to the heart of the Reach, take Highway 24 to the Wahluke Slope Wildlife Area and there to the White Bluffs ferry landing. Access to the Hanford Site (south shoreline) is allowed to the high water mark only.

Although the steelhead season is slated to open October 1, large returns have led to early openings in 2009 and 2010. As for gear, a 9 ft, 7 to 8‐weight rod is adequate where wide‐open banks allow one to follow fish. Floating line with long leaders and flies with hook size 4 through 8 are in vogue well into October. I favor a two‐hander with sink tip line to swing larger patterns or when a breeze blows upriver. My go‐to fly early in the season is a “Dr. Bill”. Its creator, Bill Rickard, introduced me to four steelhead the first time I tried it. This simple little fly has a gold bead head, a purple hackle tied with a splash of white Arctic fox and purple dubbing. Favorite fall patterns include October caddis, Popsicle, Orange Marabou and Green‐Butt Skunk. Go to Markee’s Cycle/Fly Shop (509-783-2870) in Kennewick for equipment and supplies. The Columbia Basin Fly Casters (http://columbiabasinflycasters.org) often posts fishing updates by local anglers.

Be prepared for variable flow, with water surface fluctuations up to 4 vertical feet per day because of power‐peaking operations at Priest Rapids Dam. Boaters can get stuck on the shoreline, not to mention a friend who woke up once to find water surrounding his camper. Check weekly and daily discharge patterns at http:/waterdata.usgs.gov for USGS 12472800 Columbia River below Priest Rapids Dam. I generally fish the declining hydrograph after factoring in water travel time from Priest Rapids Dam. An elevation of 16 feet at the gauging station roughly equates to flow that reaches bank‐side willows.