Maximize Your Encounters with Steelhead

Consider the following: trapping gophers, crabbing, duck hunting, digging razor clams. Would you believe these venues all have something in common? If nothing else, each requires good timing along with knowledge of behavior and habitat. Why not take the same approach to catching steelhead?  Instead of playing musical chairs with your angling experience, increase the odds of success by maximizing encounters.

For years, ecological scientists have written about “optimal foraging theory” and similar topics to help explain predator-prey interaction. What it boils down to is if predators aren’t efficient, they starve. Consequently, predators learn how to maximize their efforts on available prey rather than spend all their time hunting for something else. I’ve heard some guides call this same approach, “Never leave fish to find fish.”

Let’s start this lesson in probability theory by reflecting on steelhead behavior as it relates to their life history requirements. 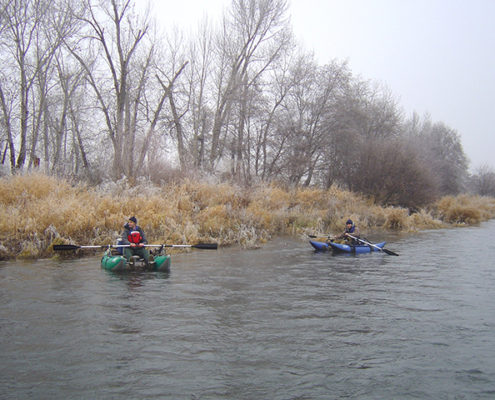 Unlike salmon, Pacific Coast steelhead are iteroparous (i.e., may spawn more than once) and feed little if at all while in freshwater. Consequently, adult steelhead must conserve energy if they are to survive spawning and make another round trip. In large rivers, a typical migration path is shoreline-oriented. Indeed, studies in a free-flowing section of the Columbia River showed steelhead move inshore to shallow water in the evening where they remain until disturbed. Recent tagging surveys also show a high percentage of steelhead typically drop into tributaries for refugia during their upriver journey. It follows that experienced steelhead anglers target known migration corridors and staging areas.

Any location where steelhead get confused, pause, or are delayed, such as off the mouth of tributary streams, the forebay of a hydroelectric dam or a shoreline projection, are typical hotspots. Hatchery outfalls are also collection points for late-season steelies. Temperature can also be a factor. For example, mid-Columbia guide Bruce Hewitt targets shoreline areas where warm groundwater up wells in late winter.

As steelhead move upriver to smaller water, cover becomes more important. Cover can take the form of depth (i.e., deep water affords more protection than shallow water), a break in the water surface such as a current edge or turbulence, submerged boulders and large woody debris. Drop your line into these areas and you will catch more steelhead.

Steelhead spawn on an ascending temperature profile each spring. During over-wintering staging periods, prior to when water temperature warms to trigger spawning, steelhead are lethargic and exhibit limited movement. During this period, it’s best to be first on the water. What’s also important to anglers is once steelhead near spawning grounds, they pair up and get more territorial. Good advice is to keep casting if you catch an aggressive buck steelhead because the odds are good a hen is lurking somewhere near.

After knowing these behaviors, how do you get your presentation into the strike zone on a consistent basis? It starts by reading the water– by figuring out habitat features important to steelhead.

No doubt you’ve seen someone standing on the same rock, casting to the same place all day long without catching a thing. Maybe they saw someone catch a fish there or maybe their buddy told them the rock was a good place to catch a steelhead. What may not have been shared were the specifics.

One way to catch more steelhead is to analyze specific habitat features in your favorite stream or river. Low water visual surveys are particularly helpful in this regard. Your basic map should consist of substrate type and size, location of overhead cover and predominant current patterns. Being able to remember and incorporate these features into your angling approach will increase the odds of catching steelhead dramatically.

Presence of shade, in addition to in-water features such as logs, boulders and broken water are attractors for steelhead. In particular, look for snags. Snags aren’t bad. Don’t avoid snags. Learn about where snags are and how to fish them. Steelhead hold near snags. Sometimes upstream, sometimes downstream, sometimes under a snag and particularly in the middle of the day. Snags are to steelhead like a “blankie” is to a 2 year-old child. They provide security.

Visualize potential holding areas by noting turbulence, back eddies, divergent current and soft spots in the current. Where would a steelhead rest as it swims from one pool or point of cover to another?

Once you have mapped a stream and notched a few steelhead on your punch card, you will hone in on sweet spots with greater accuracy. What’s required to increase encounters with steelhead is proper presentation.

Consider that on a typical day, you will be faced with different types of water (i.e., fast, slow, deep, shallow), in addition to a range of bottom types. Thus, be prepared with a variety of gear including bottom-bouncing rigs, drift bobbers, and traditional casting or trolling gear such as spinners, spoons and plugs. Each type of gear has a time and place.

To properly cover any stretch of water from the bank requires wading, moving position, adding or subtracting weight and changing the length of your cast. It starts with developing an efficient and effective casting technique. Throw out upstream 15 degrees or so, drop your rod tip to let your lure sink. Feel the lure tick the bottom as it drifts down the current line. Alternatively, cast perpendicular to the bank, and let out slack to swing your offering across the current. If these methods don’t result in a strike, shift position and try again. Take a step downstream to keep your lure on the bottom or play out line to cover more water. In this manner, work every square inch of good holding water. And the more casts you make, the more you will learn about current patterns and bottom features. Save those “hero” casts for when you have covered the area thoroughly. Otherwise, you’ll spend more time rigging new gear than fishing.

Many old-school steelheaders like myself prefer traditional drift rigs to get their bait or lure down to where most steelhead reside. That said, there is both a science and an art to it. For example, when drifting bait, the size and density of your bait will affect the drift rate, depth and trajectory of presentation. In other words, roe acts different than shrimp than nightcrawlers. Drift variables also change with the addition of yarn and floating attractors such as a Corkies or Spin-n-Glos.

Bouncing split shot, pencil lead, or slinkies across the bottom affords the best tool I know of–outside of SCUBA or underwater video– for mapping the bottom. Consider that each type of weight has different resistance to substrate because of shape and material characteristics. For example, pencil lead and split shot interact in a more complex manner than slinkies. That said, you will save a lot of money by sticking to split shot.

Consider using a drift bobber to keep your offering in the strike zone longer when confronted with a slow drift or where a long distance cast is required. The flip side is bobbers are less effective for reaching a bottom-hugging steelhead in situations having variable depth and fast current because they fish a fixed depth and impart drag.

Always note specific habitat features where steelhead are hooked such as proximity to cover, water depth, current patterns and bottom type. Trust me on this one: over time, specific patterns will develop. What’s important might not be a specific depth or velocity, rather a depth or velocity relative to what’s available. Likewise, it might not be a certain type of cover, but where a fish resides proximate to cover.

I like to watch a fly fisher work the water. Despite casual appearance, they are not merely watching their Purple Peril swing ethereally in the current. Good fly fishers have a specific method of casting and approaches designed to methodically and thoroughly cover a holding area for steelhead.

Fishing from a boat creates a whole new set of challenges, including the need to maintain proper speed and depth of your offering, whether casting or trolling. For example, casting towards the shoreline from a boat requires you manage differences in depth and velocity between the boat and the shoreline, i.e., water gets deeper and swifter as you move away from the shoreline. Also, water velocity is higher at the water’s surface than near the streambed. Something as simple as changing the angle of your cast, adding weight or playing out line can put you in the strike zone.

It’s also important to match the type and size of lure to work the desired depth. For example, a Magnum Wiggle Wart programmed to dive up to 15 feet is likely to bang the bottom in a shallow tailout. Switch to a smaller Wart to fish more effectively. Similarly, a #3 Vibrax or Mepps spinner may not sink to the bottom if you troll or drift downstream faster than the current. It may be less likely to get hung up, but if you ain’t banging the bottom, you ain’t getting in front of the average steelhead. Add a split shot or go to a larger blade spinner or spoon to generate results.

When it comes to steelhead, you will catch more fish once you figure out how to maximize your encounters. The math part of the equation is elementary. First, learn all you can about the migratory patterns of steelhead in your favorite stream. Second, figure out their preferred habitats, by fishing often and by careful observation (In other words, don’t count on others to share all details). Finally, rely on a range of methods and gear to get your lure on the bottom and in front of a steelhead’s nose as often as possible.