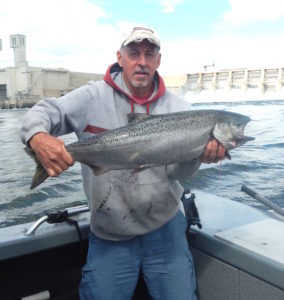 For centuries, western Indian tribes have heralded the arrival of spring Chinook salmon with a first salmon ceremony. Commercial salmon trollers look forward to the opportunity to pay off some bills. Sports anglers also celebrate harvest, usually with an exchange of high fives followed by an outdoor barbecue.

No matter what your predilection, the key to getting in on early season salmon action is preparation. Plans must be outlined, gear inventoried and tactics pondered. Here are a few ideas to get you going in the right direction.

Adult “springers” move from the Pacific Ocean to coastal rivers on ascending water temperatures, hold over in tributary streams and don’t spawn until temperatures decline in early fall. This prolonged freshwater resident period leads to a need to conserve energy during the adult phase of migration. As a result, springers tend to migrate closer to shore than summer- and fall-run Chinook. This makes them more susceptible to the anchor-up plug fishery in large rivers and to gear tossed from the bank.

Spring Chinook are also smaller in size, typically from 10 to 15 pounds in weight. Consequently, you must size your gear accordingly. For example, guide Bruce Hewitt recommends using smaller sized herring, such as green label (or anchovies where you can get them) and that you should size down to a 2/0 hook.

I can’t emphasize this topic too much. You need to know when and how many fish are coming your way. How else can you plan to call in sick or whether to lie to your wife about where you have been?

Adult passage counts, in rivers where dams are in operation, are your most reliable measure of run timing and magnitude (see fpc.org for counts at Columbia and Snake River dams). Creel census reports from state fisheries management agency websites are another source of information although they generally lag action a week or two. Guide service websites and angler blogs are helpful if taken with a grain of salt (i.e., fishing is not always “red hot”).

Identify Points of Confusion or Delay

One well-grounded theory is that more salmon are caught where they concentrate. Passage barriers such as the tailrace of a hydroelectric or diversion dam slow fish movement. Convergent currents, especially where dam operations create a back eddy, confuse and confound a salmon’s ability to locate passage structures. Upstream fish movement also stalls where changes in local hydraulics occur, such as downstream of rapids or off the mouth of tributary streams. Seek out these areas above all others.

Fishing Kwikfish, Wiggle Wart or Mag Lip off anchor is generally fruitful in a convergence zone. Depending on water depth, a jet diver or lead ball dropper will get your lure near the bottom. In contrast, downstream trolling with a flasher and herring or SuperBait is an effective approach to locate fish between known areas of concentration.

(Learn how to) Combat Fish

Combat is often the only game in town. For boat anglers, this means hog-lines. For bank anglers, it means shoreline lineups. Whatever your inclination, there are specific rules of engagement. Learn how to get along with others in a polite yet assertive way and you will catch more fish.

Casting can get territorial when you enter the combat zone. I’ve had egg clusters tossed close enough to shed water droplets on my baseball cap and bobbers land at my feet. Tangled lines are common as is grousing about casting out of turn. To keep things copasetic, match your tackle and weight with other anglers. In other words, don’t enter a line-up of drift anglers with a bobber rig and vice versa. Bringing along a buddy can help resolve tense situations, particularly if they are big and tall.

It’s only courteous to ask adjoining boaters if they mind that you anchor next to them. You should also never anchor directly below another boat. Things are best sorted out before you drop your anchor, which, by the way, should be appropriate for current and bottom type. Never anchor within casting range of plunkers unless you have a ready escape route to a long distance boat launch.

Good Bait is Everything

If I had to pick one bait to use for springers it would be cured roe. You can back troll roe behind a Spin-N-Glo, fish it off anchor, bounce it along the bottom or cast it below a drift bobber. Learn how and where to apply each method and you will catch more springers.

Many bait anglers prefer tuna balls due to ease of use and low cost. Another advantage of canned tuna is the ability to add scent (an entirely different topic). Heck, one angler announced to me that he caught a springer on a smoked oyster. The point is have a variety of baits available. When the bite slows, give those lockjaw springers something different than what they have been subjected to all day.

Get on the Water Early

The first part to this recommendation involves getting on the water before the season begins. If you are new to an area, scout out anchoring locations, such as a flat bottom profile or a ledge. Look for locations where bottom contours might help funnel fish to your lure. I consider my first outing of the spring a reconnaissance mission although there is a point in time when I want to catch a salmon!

The second part relates to time of day. Being on the water at first light is important for spring salmon. Prepare your gear the night before and pack a headlamp or small flashlight. Knowing that salmon respond to light, Guide TJ Hester says he likes to troll shallow until the sun comes up. Later in the day, light and angling pressure may push spring Chinook into deeper water.

Increasing stream flow triggers fish movement and influences water level and visibility. Expect that conditions in your favorite stream will range from low and clear to high and turbid during the spring season and that salmon will select different migration routes in response to changes in water depth and velocity. Holding areas will also be different. Bookmark http://waterdata.usgs.gov for streams of interest.

What catches fish under low water conditions may not work at higher flows and vice versa. In general, you should favor smaller lures and baits at low water and larger, more visible offerings when water is colored up. Boaters should anchor along a current edge when flows are high. Salmon tend to run further from shore when water is slow moving.

What’s different about fishing in regulated rivers is discharge can vary both hourly and daily according to dam operations. Specific operations such as spill or powerhouse flows can influence fish movement. Download this data from dam operation websites using a Smart phone while you wait for your rod tip to go down.

Mix Tried and True with New

Magnum Wiggle Warts were the gold standard plug for springers until replaced by sardine-wrapped Kwikfish. The most recent entry into the plug world are Mag Lips. All three types of diving plug come in a range of sizes and a myriad of colors. How do you know what to buy? Start with standard colors such as chartreuse and silver, orange or hot pink, then fill your tackle box with others as your budget allows. Have at least two different sizes available.

In some locales, Brad’s Super Bait has replaced the use of more traditional baits such as cut plug herring. However, don’t forget what has produced fish in the past. Whether tossed from the shore or fished off the back of your boat, Vibrax spinners sizes, #4 and #5 can produce strikes where other techniques fail. Only recently, was I shown the merits of a slow troll using Mack’s Lures Hot Wings ahead of a prawn or herring rig.

Don’t be the last to know about a new technique. Subscribe to regional sport fishing magazines and attend seminars at sportsman shows and tackle shops. Talk to other anglers and to guides. While they may not share a secret hole most are willing to talk about what they use and why.

There’s no getting around it. Spring salmon fishing leads to encounters with wind, rain and cold. When you consider average catch statistics are 20 to 30 hours per fish landed, expect to put your time in, both fair and foul.

First, don’t compromise on rain gear. A 20-gallon garbage bag with holes cut out for your arms does not count. Outerwear should be waterproof and breathable. This means a rain jacket that reaches to your waist if you fish in chest waders and a jacket that goes past your butt if you favor hip boots. Rain pants or insulated bibs also come in handy. Footwear should be waterproof, warm and have adequate traction.
When conditions are so rough that boat control is compromised, park your boat and look for a bank-fishing venue. Some of my best drift fishing action has occurred during thunderstorms.

It Ain’t Over Until it’s Over

In this day of barbless hooks, when the takedown to fish landed ratio can approach the Mariner’s team batting average, what can you do to improve your odds? For one, consider using multiple hook rigs that involve a treble hook, where allowed. Maintaining line tension on a fast-moving springer is critical. Learn how to move off anchor with a buoy system that allows you to chase after fish that might otherwise break off. Check your drag often and never quit reeling. Finally, add a long-handled net that your buddy can maneuver with ease to your arsenal.

Face it. Springers can be addictive. In my case, I don’t quit until I run out of bait or the season is closed. Like Betty Davis said about her adulterous affair in the classic murder mystery “The Letter.” “It’s like some loathsome disease, but I couldn’t give it up.”

I feel the same about springers with the difference being I haven’t killed anyone.