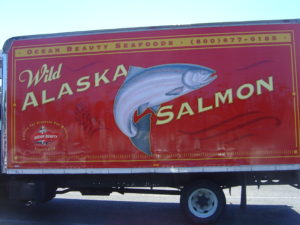 It all started when I invited my 9 year-old grandson, Adam, to go on a fishing trip to Alaska. The first phone call, from my son Matt, wasn’t unexpected. “I think I should go also, dad,” he said.

You could take his response one of two ways. Either he didn’t trust me or he didn’t want to miss out on the fun.

The second phone call came a few weeks later. “Annalise is feeling left out.” Matt said. “She wants to go to Alaska with us.”

When I shared the latter conversation with my wife, Nancy, she responded, “If that’s the case then I’m going also.

You could imagine my dilemma. What started out to be an Alaskan fishing trip for two had become a family vacation for five. A few things were in my favor, however. For one, I had traveled from Homer to Fairbanks and places in between for business and pleasure. Consequently, I knew the lay of the land and how long it took to get from one place to another. Having fished for sockeye and coho on the Kenai, Chinook on the Talkeetna, and Arctic grayling in streams near Fairbanks also provided insight on angling opportunities. But perhaps more important was, as a seasoned parent, I knew the difference between “fishing” and “family fishing.” The challenge was how to balance my angling desires against a broader set of interests that transcended gender and age.

Here’s some of what I learned along the way.

Alaska is a Big Place

It’s best to divide the state up into regions, hone into your area of interest, and figure out how long it will take to get from one place to another. The first thing I did was to contact the Alaska Tourist bureau (TravelAlaska.com) for free vacation guides and a subscription to Alaska magazine. After studying regional maps and my well-worn copy of MILEPOST, I settled on the Kenai Peninsula as having the most options for three generations of family. I identified specific locales that limited driving time (and backseat complaining) to less than 4 hours a day, yet allowed us to rest and relax. Over the course of spring and early summer, I shared the trip itinerary, maps and pictures of Alaskan scenery with members of the family so they could imagine the possibilities.

Do Your Homework Well in Advance

Traveling with school-age children requires you plan your trip during the height of the tourist season, which in our case was the 6-week period between early July and mid-August. And we had one week to do it all. My first objective was to determine when salmon were present. After all, the original goal was to have a meaningful fishing experience. This is where the Alaska Department of Fish and Game’s website (www.adfg.alaska.gov/) proved valuable with information on run timing, tackle, fishing methods and regulations.

To complicate, my son and grandson were seasick candidates. Consequently, offshore fishing was off the list. I found that Chinook salmon entered most southeast Alaska rivers in June and that peak run timing for coho and pink salmon occurred late in the summer. This information secured sockeye salmon as the species of interest. Consequently, I booked a guide on the Kenai River and planned the rest of the trip around a mid-July date. With luck, we would find time to sneak in a cast or two for Arctic grayling, Dolly Varden or rainbow trout. Knowing that motels filled up quickly during salmon season, I secured accommodations 4 months in advance of the trip.

Adding three people to the mix means a bigger budget for lodging. Not to mention that having multiple-generations and genders limits the amount of room sharing you can do to save money. For example, grandma and grandpa require more privacy than two school-age children. Factor these considerations against the average motel or lodge that caters to 2 to 4 people. We started off the trip in style, with a dockside suite at the Holiday Inn in Seward that was roomy enough to accommodate two rollaway beds. That said, two nights of togetherness was more than enough for even this close-knit family. Separate rooms, available at more economical lodging venues, kept the average cost of lodging under $300 per night.

Early on, I ruled out travel by train for logistic reasons. While, traveling by car provides more flexibility for families, it isn’t cheap. One compromise was renting a full-size automobile in lieu of a van. Since I paid, nobody complained. Efficient packing was helpful.

Meals presented another give-and-take situation. Matt and Nancy’s competing culinary desires didn’t equate to the average fishing trip where you snack from a cooler and grab something quick for dinner before getting up at dawn to start all over again. I had also forgotten that two growing children must eat every 2 hours or they waste away.

The final balancing act among three generations of family involved recreation. One tradeoff for a guided fishing trip is that other members of the party expect something of equal value in return. Maybe not expensive jewelry (although Nancy hinted at it), but spending time doing something they like. Luckily we found a broad range of options that included swimming in the Nikiski heated pool, gold panning and wildlife tours. The end result was a fair mix of time spent fishing versus family activities. 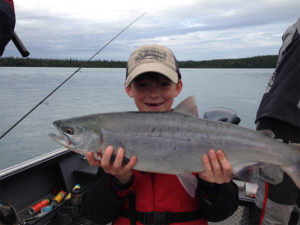 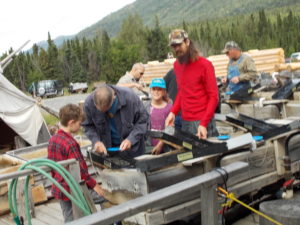 Would I do it again? You bet, in a heartbeat. The quality of time spent with multiple generations far outweighed my initial desire to fish, fish and fish (although we did sneak in more fishing time than I thought). Shared family experience that included watching orcas herd a school of salmon in Resurrection Bay and the view from the shoulder of Mount Alyeska were equally as exciting as watching my grandson land a 12-pound mint-bright sockeye. What the trip proved was you can have your family vacation and you can fish too. It’s just different.

Meanwhile, Adam and I have made plans to sneak off for another fishing trip– this time for barn-door halibut. As for the others, riding the Alaska Railroad, northern lights and touring Denali National Park are on the list for their next visit to the land of “The Last Frontier.”