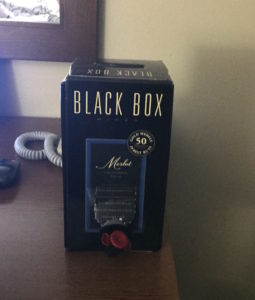 We were five miles outside of Orofino when BT shared reserving separate rooms at the Best Western. “One is a dog room,” he said. “I still feel bad about leaving Crystal at home though. Her ears were drooping when I left.”

“How much are the rooms? I asked.

“You’ll have to pay for one night unless we rent one of your rooms,” the front desk clerk said over BT’s cell phone.

“Put the dog room up for sale please, ” he replied sadly.

I reflected back to other fishing trips where my sleep cycle was disrupted. Al got drunk once and ran out the door in his briefs after bedding down for the night. Leroy would turn the overhead light on to take a pee, just like he did at home. I had no clue what to expect from BT given our longest shared stint was four hours on his boat.

Another traveler took the dog room, which led to BT and I shacking up. Admittedly, the first night tested our relationship. Blame it on a greasy spoon dinner, Black Box merlot and him running off to the motel spa after I tucked myself in for the night. Luckily, time on the stream heals all wounds.

Following a four-aspirin day spent casting for complacent steelhead, our next evening’s culinary pursuit led to the bar side of the Ponderosa Restaurant. BT was in high spirits after tagging out with two hatchery hens. My desire was to shuck a role as principal net man before the trip was over. I scanned the daily specials before ordering a 16-ounce ribeye with hash browns, country gravy on the side. There’s something about a hangover that begs for greasy food. BT got weary of reviewing the detailed four-page menu and ordered the same.

We headed for the salad bar where BT loaded up with beets, green peppers, cottage cheese, garbanzo beans, mayonnaise-infused macaroni and alfalfa sprouts. I hoped the combination would not prove lethal to his digestive tract and haunt me in the night. Sticking with basic rabbit food, I topped my creation of iceberg lettuce, cucumbers, carrots, cauliflower and broccoli with chunks of good stuff scraped from the bottom of the Roquefort container.

BT proved to be a congenial roommate despite predilection for midnight soaks and exotic salad, which begs the question, how far should you go to save a few bucks on an extended fishing trip? You may have downed a pitcher of beer, swapped tall tales and commuted together, but these activities do not test your mettle like sharing a motel room having two double beds close enough to reach across and steal a blanket. (Not that you would.) At your feet is a big screen TV. A radio alarm clock rests beside a single-switch lamp on a nightstand near a pillow you hope will not crick your neck. The rug smells of Lysol and peppermint. A thin Chenille curtain fails to mask the intrusion of a parking lot floodlight.

A particular challenge for overnight fishing trip “virgins” is choosing a safe side of the bed. You don’t want to bump into the other guy in the night and you don’t want to look him in the eye when you roll over. Preference is you don’t sense he is there. On the other hand, it’s difficult to ignore sleepy time behaviors that include talking in his sleep, tooting, groaning, rolling around, sneezing, coughing, cooing, belching, scratching, nose whistling and visiting the toilet multiple times. Then there is the sound of his cell phone messages dinging in the night.

Best case is your companion turns out like BT: considerate, communicative and respectful of your privacy. He will ask if you prefer to shower at night or in the morning, what time you want to get up, and when you are ready to turn the TV off and get some shuteye. He could be like my brother Dusty who carries a small flashlight enabling him to politely read a paperback under his bed cover while I nod off. (My other brother Daran enjoyed stretching his underpants over my head while I slept.) An ideal roommate lets you to be yourself, tolerates your Pandora playlist and stops for milkshakes on the way home.

Worst case is your first-time roommate goes to the motel bar, picks up a chick and brings her back to the room to say “Hi.” Worse yet, he asks you to leave the room for an hour while they get better acquainted.

In which case, you should have opted for the dog room.