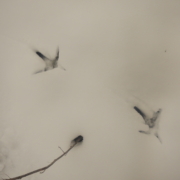 Tears of joy ran down my bewhiskered cheeks when I tore colorful Christmas wrapping loose from a large cardboard box with an L.L. Bean label embossed on the end flap. Inside nestled a pair of 48-inch long, ash frame snowshoes that appeared to glow in low light. Rawhide laces. Handcrafted in Canada. I’d dreamed of owning a pair of vintage snowshoes since childhood, but held off on purchase when I could well afford it. A frugal upbringing may have entered into the equation.

My prized snowshoes were quickly put to use on wintry treks along ice-glazed creeks and conifer-lined ridges of the Blues. I traversed steep slopes and old growth forest where deep snow rendered a route virtually impassable to outdoor adventurers on foot or cross-country skis. Mysteries of animal behavior were revealed to me via tracks of cougar, elk, ruffed grouse, and snowshoe hare. Marks made by the plunder of great horned owls and the kill of red foxes intrigued. Dragging a newly cut Christmas tree to the truck in waist-high snow drifts no longer challenged.

A whole new world opened up when Nancy and I moved to a golf course development outside of town. When snowfall accumulated to reach ankle-deep, I’d strap on my snowshoes and hike through a 40-acre parcel of big sage, rabbitbrush, and sulfur buckwheat to reach a clear days view of the Yakima River and Rattlesnake Mountain. The trek provided a hinterland experience in a an otherwise suburban setting.

At some point in time – I can’t say exactly when – the snowshoes began to gather dust on the garage wall. A new housing development blocked route to the river. Two-hour drives to the mountains on black ice became more of a challenge than an adventure. Looking out the living room window this winter though, the sight of shaggy snowflakes falling from a muted sky made me want to tip my face back and catch them on my tongue. As new layers of snow gathered, I thought back to when I flopped on my back and shaped an angel in soft surround.

I move swiftly to the cluttered garage, strap on my vintage snowshoes, and reflect on what I have missed. How fresh snow clothes naked branches in vestal white and renders the rough edges of an otherwise stark landscape smooth. Snowfall is also about stillness. Its presence causes a too-busy world to stop and take a breath. I recall magical moonlight treks over dune-like drifts of powder, peering up at a never-ending night sky, and breathing frosty air that is sharp and clean. The reflective properties of ice and snow never fail to add sparkle to my mood. According to an article in Science magazine, “light reflected off fresh snow can outshine a full moon.”

I skirt the edge of the golf course where a tiny vestige of native shrub and bunchgrass vegetation remains. My snowshoes float atop a foot of snow so dry it squeaks. I look for animal tracks and think back to a photo I sent to a friend for verification. Ken, who has a degree in Wildlife Science, wrote back, “Most likely a squirrel. Rabbit tracks form a distinctive triangular shape.”

When I replied I had hoped the tracks were from a cottontail rabbit that used to frequent our yard, he wrote, “I always wonder why people even ask me if they don’t want to hear my answer.”

No sign of animal activity exists where wandering coyotes and mule deer once strolled, except for the wispy tracks of ground-feeding juncos beside the senescent bloom of gray rabbitbrush. Hoping to find evidence of a displaced skunk or porcupine, I come upon deep tracks that have a long stride. Their route leads around a small stand of big sage as if a large animal nosed for prey. Impressions culminate near a steel fence. Snow is worn down to dirt and piled up at the edge of multiple tracks. Grisly evidence of an encounter between a coyote and a cottontail rabbit, I wonder? Then it comes to me: the neighbor’s 100-pound, golden Lab pup got loose again.

The wide-open spaces, gentle slopes, and dogleg meanders of area golf courses provide excellent opportunity for winter sports. However, these settings don’t have the ambience of forested slopes and river valleys. My vintage snowshoes are now slated to take up residence at our cabin in the Umatilla River canyon. Three feet of fresh snow blanketed the surround there in late February. Higher elevations of the Blues are expected to retain ample snowpack over the next few months. There’s no better time than now for a winter trek.

Snowshoes allow for a reliable pace that encourages reflection. They lead you to places where the hollow thump of falling snow and the raucous call of a sentinel jay might be all that splits the stillness. Perhaps best of all though, they provide ample opportunity to look for animal tracks in the snow.