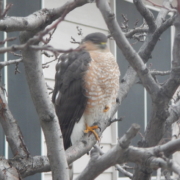 Much of eastern Oregon and Washington is raptor country – wide-open surround where red-tailed hawks, northern harriers and American kestrels maintain vigil over cultivated fields and bunchgrass slopes. On any given day you might spot the soaring flight, graceful glide, distinctive hover, or dive bomb of these noble birds as they hunt small mammals and birds. More often than not, I pause to watch and wonder what it would be like to fly.

Some encounters with hawks have been personal. I once scooped up a kestrel that fell into the Columbia River after it locked talons with a competitor and lost an aerial battle. The small hawk shivered in my grip to shake water from its plumage and took wing, no worse for wear.

A few years back, while castingfor salmon on a rainy October afternoon, I heard a crash of wings in bulrushes that crowded the Yakima River shoreline and looked back to see a struggling northern harrier. Curiosity took me to its side. Had the bird been shot? Did it suffer from poison or some other malady? Ignoring all rules of what to do when you find injured or sick wildlife, I corralled the soaking wet bird, covered its head with a loose cloth to calm, and took it home. It spent the night resting warm and dry on a bath towel in a large cardboard box. The following morning I took the hawk out of the box and placed it on the lawn for inspection. To my surprise (and elation), it spread its wings and flew off.

I can’t say every attempt to save a baby barn swallow that got bumped out of a mud nest before it fledged or a robin that crashed into a picture window turned out as well.

What keeps my attention during the dreary, fog-shrouded days of winter is a pair of sharp-shinned hawks or “sharpies” that hunt near our suburban landscape. A shelterbelt of big sage, wild rose, and red bark dogwood provides a nighttime runway between a public golf course and our back yard for wandering skunk and porcupine. Two seed feeders, a pair of thistle socks, a suet feeder, a small fishpond, and the decaying fruit of crabapple, cherry, and mulberry trees attract a multitude of small passerine and resident songbirds. Mourning and ringed-neck doves are attracted to birdseed that spills to the ground. Before a nearby housing development crowded our view of Rattlesnake Mountain, up to 80 California quail roosted in the spruce tree next to the driveway. Simply put, the setting is an “eat all you want” buffet for a stealthy predator hawk.

Our sharpies plot their next move from the naked branches of a towering maple, gnarly-bark Italian plum, or thorny black locust tree. Sharpies have been described as ‘pursuit hunters.” They appear as a blur of motion when they burst from cover to snatch a small bird. Their hapless prey is carried to a nearby perch or the ground for consumption, leaving only a pile of feathers as evidence of the carnivorous act.

Sharp-shinned hawks exhibit sexual dimorphism, a common trait for birds of prey. Females may be a third again larger (up to 15 inches body size) than males (10 to 11 inches). The disparity in size makes it difficult to tell the difference between a female Sharpie and the occasional Cooper’s hawk that also shows up in our back yard. According to field guides, sharp-shinned hawks have a squared off tail while the tail of the larger Cooper’s hawk is rounded. Sharpies also have a smaller head. Good luck telling the difference though, when they fly by at a top speed of 60 mph.

The majority of plundering action takes place in a narrow corridor between the south side of our house and a trio of tall arborvitae. A window over the kitchen sink allows for furtive observation. Just the other day I looked out the window and wondered, why no six-pack of goldfinches hanging on the thistle sock? Why no squabble between juncos and white-crowned sparrows over sunflower seeds? That’s when Nancy exclaimed, “A sharpie is on your Adirondack chair.”

I sprinted to the living room to get my camera, but when I got within shooting range a naïve sparrow flushed from in the twisted honeysuckle vine that hangs over our back patio. In the blink of an eye, the sharpie took off and plucked it from the air. Given the large number of sparrows that hang around our back porch, it’s unlikely the swift kill put a dent in their population. What the encounter provided though, was a classic example of how nature maintains a balance between predator and prey.